The Kingdom of Bhutan is known for its culture, architecture and archery, but in many ways, it has remained a mystery until half a century ago.

The serene country, which is about half the size of Indiana, is cradled between its husky neighbors China to the north and India to the south. Its lands include subtropical savannahs to forests to the unforgiving Himilayas that guard the country’s eastern border.

Its isolation, domestic policies and decision to limit tourism have helped to protect its culture and its natural beauty.  These are among the reasons it is referred to as the Last Shangri-la and the crown jewel of the Himalayas.

On the other hand, the Bhutanese call their country Druk Yul, Land of the Thunder Dragon, because of the violent snow storms.

The country has three horizontal regions.  The southern layer is the most agricultural where farmers grow fruit, rice, spices, tea and tobacco.  The middle portion has thick forests and copper and coal mines.  Agriculture and timber make up about 60 percent of the country’s small and under-developed economy.  The northern part, which includes the Himalayas, is non-agricultural and, frankly, can be downright inhospitable.

The landlocked country spans 18,147 square miles.  It is served by several small rivers that eventually empty into the Bay of Bengal.

Many of Bhutan’s population, an estimated 683,000, live in the central valleys. The median age is 23.5 years, with population growth at about 1.3 percent.

The country’s three main ethnic groups are the Ngalongs, Sharchops and the Lhotshampas.  The Ngalongs live in the western and central regions.  They are descendants of Tibetan immigrants who arrived in Bhutan in the 9th century. The Sharchops live on the east side of the country. They are considered the original inhabitants of Bhutan. The Lhotshampas are the ethnic Nepalese who live in the south. 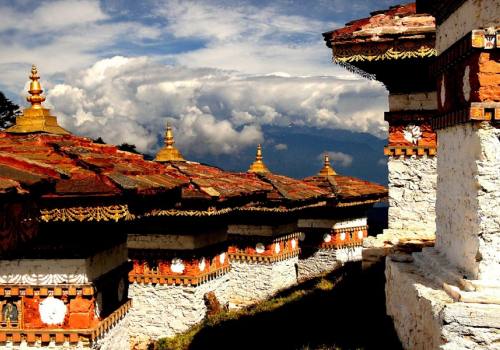